A ROYAL Marines Reservist inspired by his work with the Welsh Ambulance Service during the Covid-19 pandemic is now pursuing a career as a paramedic.

Fusilier Dominic Hardware was among more than 200 members of the military who supported the Trust’s Covid-19 effort by driving ambulances at the height of the pandemic.

The 34-year-old, of Cardiff, enjoyed his experience so much that he joined the ambulance service full-time, initially as an urgent care assistant.

The father-of-three has since qualified as an emergency medical technician, based in Cardiff.

Dominic said: “It all started with an email from the Reserves asking for military assistance to support the Welsh Ambulance Service. 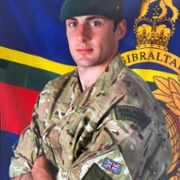 “As I had my C1 driving license and the experience they were looking for, I applied and was accepted.

“After checking where Caernarfon was, I had my medical, including all my inoculations, packed my bags and said goodbye to my three-month-old.”

Dominic was a member of the Royal Marines for seven years, during which time he toured the Middle East and Africa.

He said: “I really enjoyed my time in the military, I’m a massive advocate.

“Without sounding cheesy, it gave me a purpose and direction.

“I gained everything I have from the military, including my qualifications and even my driving license.”

After supporting the Welsh Ambulance Service for three months during the pandemic, Dominic left his role as a project manager at a local charity to become an urgent care assistant for the Trust.

Urgent care assistants support emergency crews by attending calls where a patient requires an urgent planned transfer for treatment, either from home or from one treatment centre to another.

He said: “While I was supporting WAST, I was really struck by the professionalism from the people in the service, and that’s what really caught my eye.

“I remember my first cardiac arrest – and now I’ve been to a plethora of jobs.

“I told myself that I wanted to join WAST, with the ambition of doing the paramedic’s course and that’s still the goal.

“I think anyone who feels the need to help people would do the same in my position.”

Before qualifying as an emergency medical technician, Dominic was recognised for his services during the pandemic with a mention in Her Majesty the Queen’s New Year’s Honours list and a commendation from General Officer Commanding division – the highest military certificate.

He said: “I didn’t expect to get acknowledged as I was just doing my job.

“I enjoyed the role so much and found it so rewarding.

“There are similarities between the military and WAST – not only are we all wearing the same uniform, but there is also a massive team spirit.

“It also gave me the ability to keep calm in stressful situations which I’m able to use in my current role.

“Passing the emergency medical technician course in May has already broadened my knowledge. 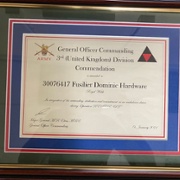 “Fingers crossed that as soon as possible, I will be jumping on the paramedic’s course.”

Kevin Crowther, Service Manager for Emergency Medical Service, in the South East, said: “The Trust is incredibly lucky to have people like Dom who are extremely passionate about helping and caring for people.

“I wish him the best of luck in his career and hope he can fulfil him ambitions of becoming a paramedic.”

More than 20,000 military personnel were tasked with supporting public services across the UK during the pandemic as part of a ‘Covid Support Force’.

Among them were more than 235 personnel from the British Army, Royal Navy and Royal Air Force who the Trust enlisted on three separate occasions.

Military support of the Welsh Ambulance Service, under what is known as Military Aid to the Civil Authorities (MACA), has now drawn to a close.